what we do events donate store join us

Join Us to Empower The States to Make People's Lives Better

Thank you for joining us! You should expect a welcome email from us soon and our regular newsletter in a week or two. 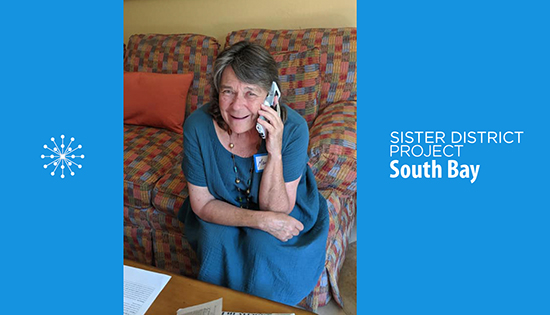 We are a group of dedicated volunteers in the South Bay area (part of California SF Bay), working to change the legislative landscape around the United States and build sustained progressive power in the states.

We fundraise, phone bank, write postcards, and work tirelessly to elect our candidates who will make a difference. We also participate in Sister District Action Network's research to determine best practices for increasing voter participation. Read more about what we do.

We hail from different backgrounds, enjoy each other's company, and work tirelessly to bring change. Be a part of our community and make an impact!

In 2021, our chapter wrote the most postcards in the nation and our fundraising prowess was #2! Overall, our 2021 efforts rocked: through ten events, we raised $100,000+ for our candidates and grassroots organizations, called thousands of voters in 28 phonebanks, and wrote thousands of postcards to support the campaigns and help the Sister District prove that writing to voters works.

The legislators we helped elect are already taking action: advocating for statewide mask mandate (WI), proposing common-sense gun reform (TX), fighting for working families (PA), and on and on.

Be a part of our dynamic group of volunteers who make a meaningful change in our country, one postcard or phone call at a time! Step up and help us run events, fundraise, or recruit more volunteers.